The scheduled release of Drupal 9: what it means for Drupal 8 and 7

07.11.2018
Comments
Share on FacebookShare on TwitterShare on GooglePlusShare on Linkedin 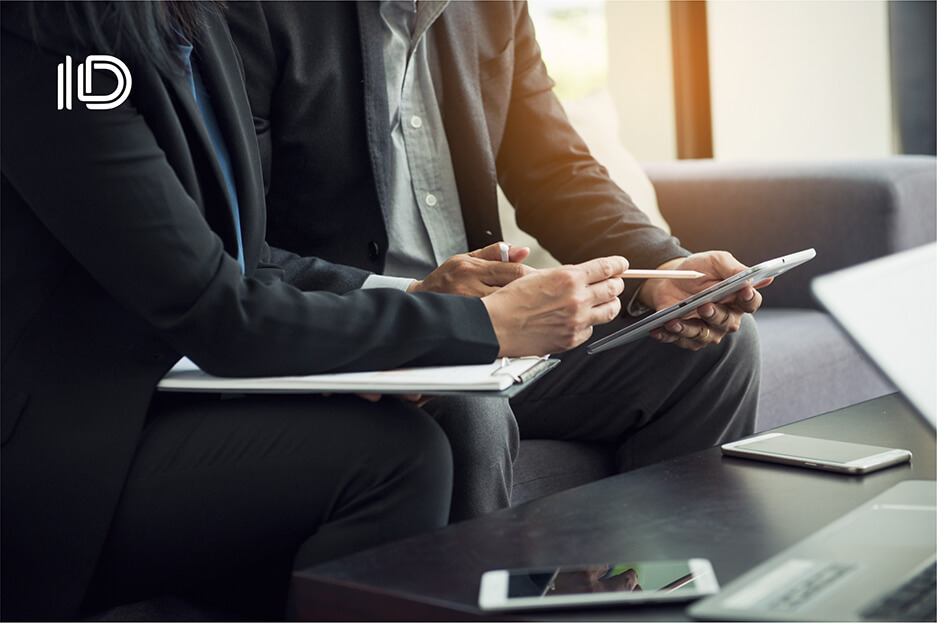 Every big Drupal release opens fantastic opportunities for websites. Three years ago, the eighth Drupal version came to this world — and the world fell in love with top-notch Drupal 8 improvements. Drupal 8 has been getting more and more awesome on its way from Drupal 8.1 to Drupal 8.5, and the latest version, Drupal 8.6, is cooler still. Drupal 8 is on its peak, but the cycles of development never stop. That’s why the Drupal community has already announced the expected release of Drupal 9 and end-of-life for Drupal 8 and 7. Let’s see what it means to Drupal 8 and 7 website owners and what action is needed from them. And, of course, our Drupal development company is ready to help them take this action.

A little while after D8 was released, the most impatient and curious users began to ask questions about the future Drupal 9. When will it be released? What will it offer? Will websites need another upgrade?

Despite the fact that the development branch for Drupal 9 was started years ago, no one could know its release year for sure. There were even suggestions that Drupal 9 would never come at all — raised by a totally new approach to updates in Drupal 8 and the regular innovation mode.

However, the situation changed in September 2018, at the world-wide meetup for drupalers — Drupal Europe in Darmstadt. The “phantom” of Drupal 9 finally took shape. D9 will come, and the year is set! Drupal founder Dries Buytaert announced the Drupal community plans on it, as well as illustrated it  with images: 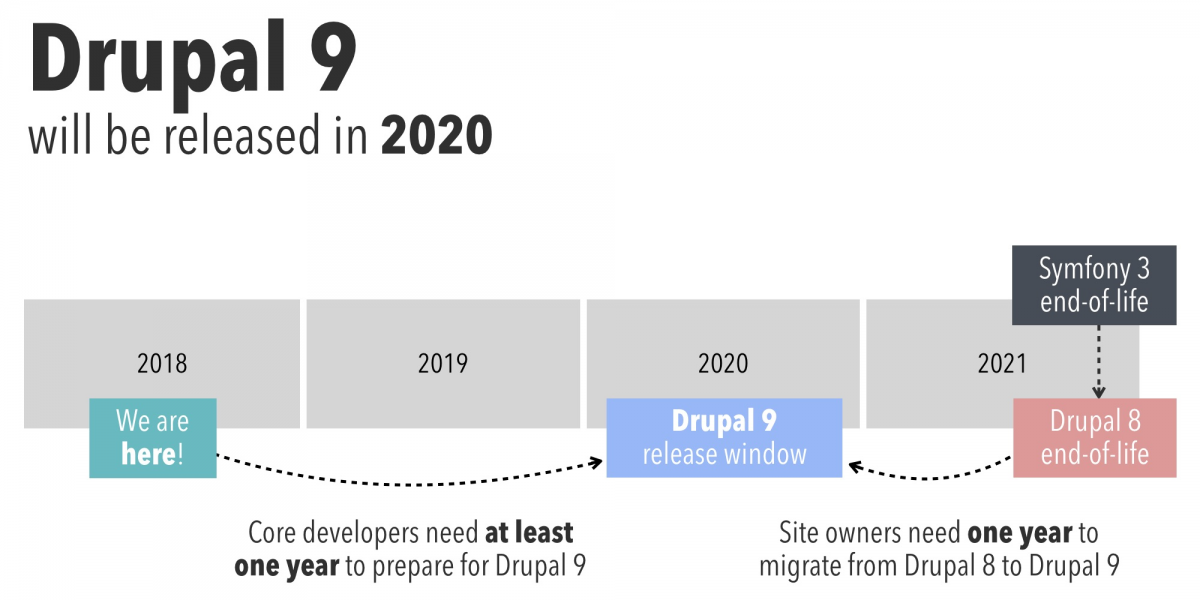 End-of-life for Drupal versions: hey, what does it mean?

End-of-life, or EOL, is the moment when official support for a particular Drupal version drops. The Drupal team stops watching over it and creates no more updates and patches for it, including those in the security area. This means more vulnerabilities to hacker attacks and, of course, no new features.

For example, February 24, 2016, was the EOL for Drupal 6. The service of Drupal 6 to 8 migration became a very popular one with our Drupal team, because many customers applied for that. By the way, if you are still using Drupal 6, it’s high time to upgrade — better late than never!

Usually the two latest Drupal versions are supported: the newly released and the previous one. However, in the case with D9, the EOL for D7 comes a little bit later and for D8 a little bit earlier than usual — in 2021 for both.

Although the end-of-life sounds a little scary, there is no need to worry. See the next chapters for more information. 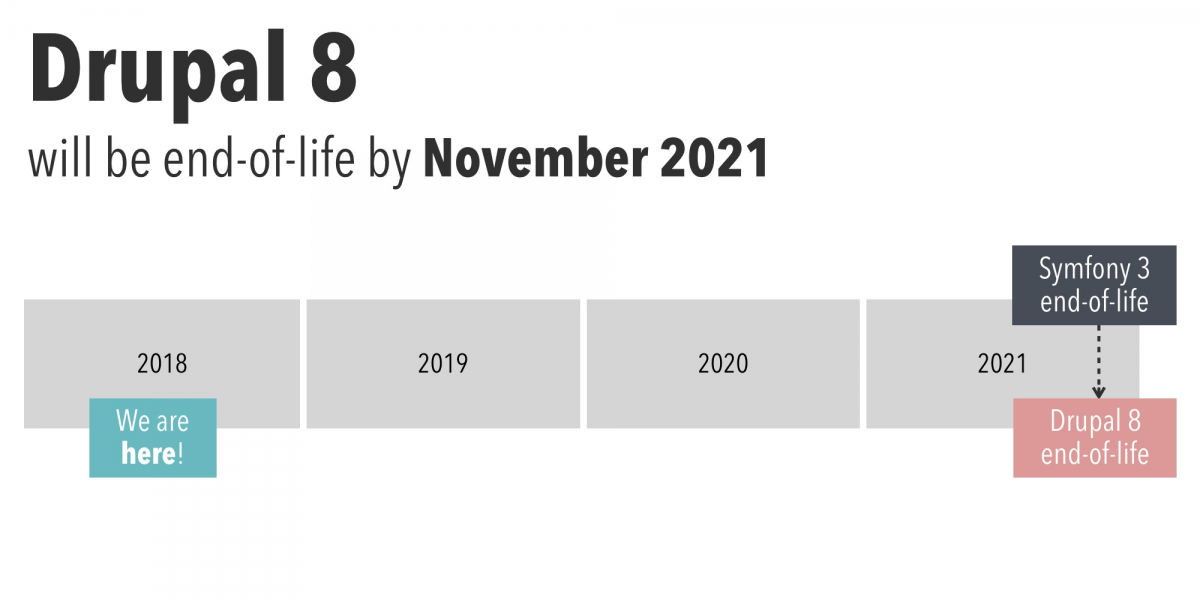 Drupal 8 is in the center of community’s ideas and is getting lucrative technological innovations all the time. Despite the EOL in 2021, the future looks particularly bright for D8 website owners. And here’s why.

Compared to Drupal 7, Drupal 8 is a technological breakthrough. That’s why upgrades from D7 to D8 are often lengthy (depending on the site complexity). But if you have moved to D8 from D7, that was your LAST cumbersome upgrade. No more of that from now on!

Drupal 8 websites will move to D9 quickly and smoothly. Lightning-fast upgrades will be provided for those that are using the latest Drupal 8 minor version and no deprecated APIs. This golden rule of keeping up-to-date and avoiding deprecated APIs helps even contributed and custom Drupal 8 modules be instantly compatible with Drupal 9! Our Drupal web studio is always ready to take care of this for you.

So an upgrade from D8 to D9 will be something you will barely notice. The secret is, according to the principle of continuous innovation, Drupal 8 releases backwards-compatible minor versions every half a year. Drupal 9 promises to be almost identical to the latest minor version of Drupal 8 with deprecated code removed, as stated in the article by Dries Buytaert “Making Drupal upgrades easy forever”. 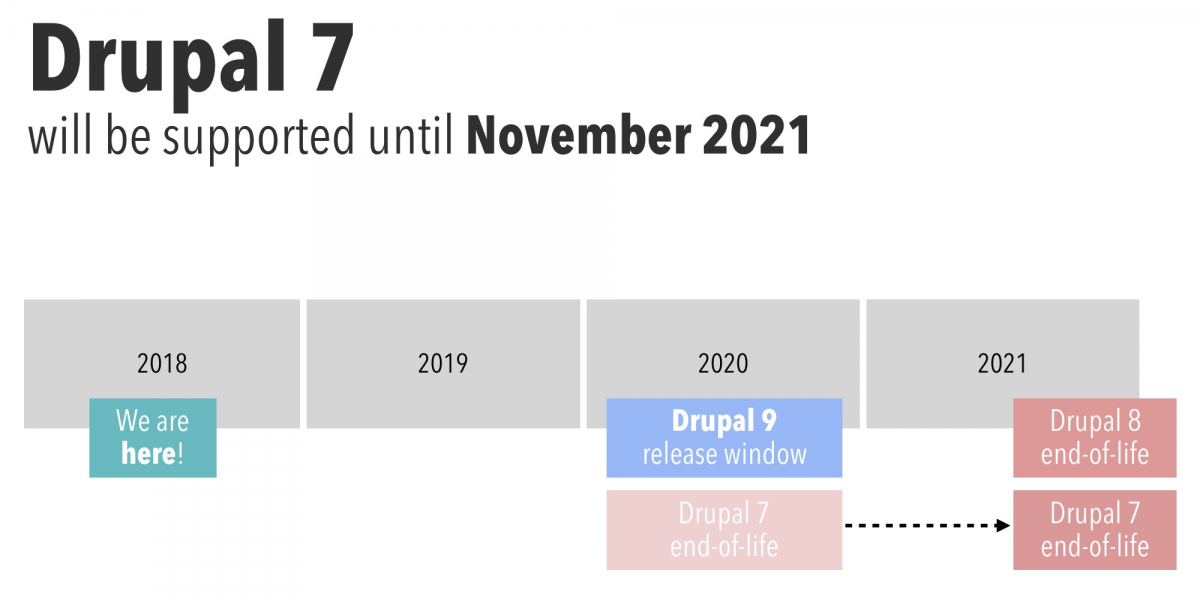 We wrote that the future looks bright for Drupal 8 website owners, but it also looks good for Drupal 7 website owners! They only need to take more decisive action. So what should they do considering the dropping of support in 2021?

So there’s no need for a fortune-teller to predict your future in relation to the release of Drupal 9 ;) The future looks bright for you in any case! The only condition is that have good drupalers on hand.

Drupal updates and upgrades, as well as Drupal support and maintenance, are among our areas of expertise.

Hopefully, content editors and website owners are ready to gasp in admiration — because we know they will when they discover Gutenberg editor in Drupal 8. The eighth version of Drupal already...

Congrats to everyone on the release of Drupal 8.6.0! :) The new minor version of Drupal promises to be especially attractive for website users, owners, editors, and developers alike. Six months...

Everyone can enjoy the advantages of working with Drupal CMF in terms of filling a website due to...

The dream of many website owners is to have the option to send emails on their websites. Of course, it’s possible with Drupal 8, because it has infinite powers. We’ve already discussed how your...