Drupal 8.3.0 is out: let’s take a look at its innovations

11.04.2017
Comments
Share on FacebookShare on TwitterShare on GooglePlusShare on Linkedin 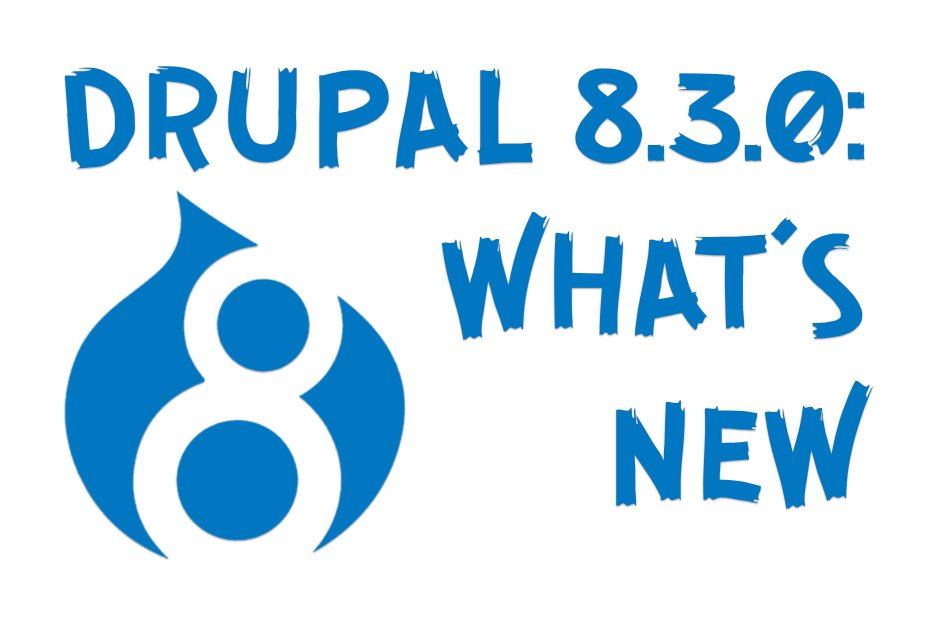 Undoubtedly, the biggest days in the Drupal world are the days of major releases. Everyone had been waiting for the release of Drupal 8 like kids at Christmas, then “unwrapped” their present with impatience. They were impressed with its brand-new features! Each feature deserved to be described, which resulted in our collection of Drupal 8 articles to mark its birthday. However, you do not have to wait for so long anymore — the Drupal community now also prepares big gifts in small packages twice a year. They are minor releases, and the latest of them, Drupal 8.3.0, has come out on April 5. In this article, we will take a glance at this new approach to Drupal releases, and, of course, see what makes Drupal 8.3.0 so cool.

Beginning with Drupal 8, the Drupal community decided to switch to the approach of making regular minor releases (8.1.0, 8.2.0, 8.3.0 and so on), meant to make everyone’s adoption of the next new big product more seamless. Minor releases offer significant innovations with backwards compatibility, API enhancements, better usability, an easy upgrade path, and more. Each of the releases is scheduled for a certain month and proceeded with a beta and an RC version, so you always know when to expect it and what to expect from it. So let’s delve into the newest of them, Drupal 8.3.0.

Convenience of content editing is among Drupal 8’s main policies. Drupal 8.3.0 features a new version of CKEditor (4.6) which has an updated UI, a new and modern-looking default Moono-Lisa skin, the Copy Formatting plugin, the completely rewritten feature for pasting from Word, keyboard shortcut hints, new Upload File and Balloon Panel plugins, and more. Drupal 8.3.0 also offers the AutoGrow plugin for that makes it work better with larger screen sizes. In addition, you can now enjoy the drag-and-drop image editing feature.

Here is a module that has become known as one of the most interesting novelties of “the great eight.” The Big Pipe greatly improves a website’s performance by delivering the unchanging part of the page to users immediately and then serving the rest of the content. Coming to Drupal 8 as an experimental module, the Big Pipe has finally reached the stable stage in 8.3.0, as well as undergone some enhancements, including those for usability on mobile devices.

This innovation will be especially handy for companies with lots of content authors and complicated content approval processes. One of the experimental Drupal 8.3.0 modules — the Workflow — will now add its power to the Content Moderation module, introduced yet in Drupal 8.2. Using it, you can easily configure the content publishing states and give certain users the permissions to change these states. You will also see your workflows on the screen and enjoy a simple and intuitively understandable UI.

Improvements in the APIs

The new features and bug fixes to the APIs are impressive in Drupal 8.3.0. Here are just some of them:

As you see from the serious work around 8.3.0, Drupal 8 is in the center of attention from the Drupal community. It will be getting the best, the newest, and the most relevant features. Maybe it’s time to come to the Drupal 8 side? ;) Get a new, shiny website or upgrade your current one with the help of our skilled Drupal developers. It’s worth discussing right now!

2
How to integrate Google Analytics with Drupal 8
Drupal 8, SEO
10089 views

If you are a businessperson or your company’s web resource owner, what benefits will Drupal 8 give you? What will it help you gain? What marketing qualities does it add? We’ll answer these...