06.09.2016
Comments
Share on FacebookShare on TwitterShare on GooglePlusShare on Linkedin 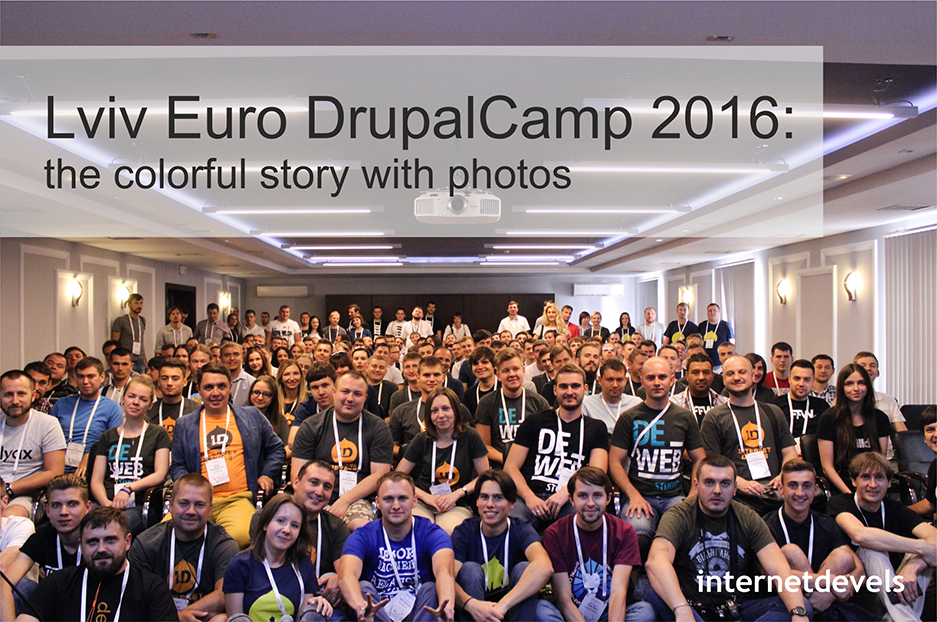 It seems like last year's Lviv Drupal Camp was yesterday. But here's a story about the new one! Enjoy the report made by its organizer, our tireless event manager ;)

When an event is over, your memories are all that is left. Two days in the awesome company of 230 participants flashed by very quickly, but left a nice aftertaste and impressions for the whole year ahead. However, we are happy to share our memories just to come back for a few moments to Lviv Euro DrupalCamp 2016.

The 5th Lviv Euro DrupalCamp kept with its tradition of having a pre-party. On September 3, all participants gathered in a truly historic location of the city, the 18th century armory building. But the participants were not surrounded by guns and cannons — the old armory had been re-equipped to be a restaurant.

The Saturday evening was filled with the scents of grilled dishes and beer, by the meeting of old friends, socializing and smiles — everyone was in good humor. Everyone had a good time, both the organizers and, of course, the participants themselves.

We couldn’t do without interesting surprises, however, so we invited a special guest — a magician. Web development is also magic, right? That night, the magic was created for web developers, not by them.

Another good tradition is music at the party. A band from Lviv played rock-and-roll with a special surprise being a song about Drupal!

Fun is fun, but the reason we were excited to gather was for a conference :) The participants, the speakers and the sponsors came together to learn new things about Drupal. Each visitor received a package which included nice souvenirs from the sponsors and a T-shirt that will long remind its owner of this special weekend.

Viktor Levandovsky, the founder of Internetdevels Drupal development agency, officially opened the conference, thanking everyone for the atmosphere at the pre-party and hoping that everyone would study, grow and attend such events again and again.

The speeches came in 3 streams. The first stream was devoted to the issues of the Drupal community development, Drupal project quality, configuration in Drupal 8, Docker use, and process optimization.

The second stream was just as interesting, as the speakers covered the issues of migrating multisite platform to Drupal 8, using Composer, etc.

Last but not least, the 3rd stream gathered everyone who wanted to develop their practical skills, because the speakers held their own workshops. It was focused on working with CIBox, Docker, PHPStorm, as well as to the issues of growth and motivation of web developers within the company.

During the breaks between the presentations, the participants talked, studied the sponsoring companies, played foosball and jenga, and relaxed in a special massage area.

To sum up, we can say that Lviv Euro DrupalCamp 2016 left a whole lot of positive impressions. Visitors smiled and sincerely thanked us for the work done — and this is our most important award.

We have recently welcomed you behind the curtains to show you how we organize our famous IT events. And now it’s time to announce one of them approaching! This is a very famous annual Drupal...

2
How we organize our IT events: a look behind the scenes
Events
3350 views

3
IT Sales & Marketing Summit by InternetDevels: an escape to paradise!
Events
2975 views

InternetDevels Drupal development company created IT Sales&Marketing Summit at Svitiaz Lake, where brain training and skill sharing is perfectly combined with the fabulous feeling of having a...

4
InternetDevels & Drudesk at DrupalCamp Kyiv 2016: at the heart of Drupal!
Events
3649 views

5
Your future in the ІТ: a conference by InternetDevels
Events
2697 views

On May 21, InternetDevels Drupal development company organized a really special event, the first high-school student conference entitled "Your Future in the IT."