22.10.2015
Comments
Share on FacebookShare on TwitterShare on GooglePlusShare on Linkedin 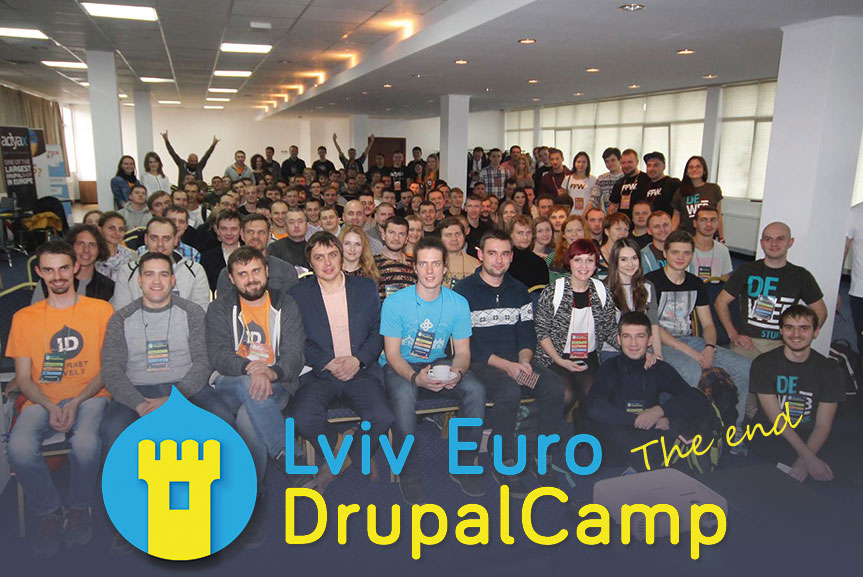 An open-source community is also open-heart! ;) Drupalers are one of the most friendly people on Earth and they need to stick together. Knowing that, every autumn InternetDevels Drupal development company organizes a cool IT hang out called Lviv Euro DrupalCamp.

Dear drupalers, we’ve done it! :) This year’s camp has surpassed our expectations and exceeded a milestone of 200 participants. Let’s keep rocking!

If you’ve been with us at Lviv Euro DrupalCamp 2015 on October 17-18, it’s time to enjoy our report and find your pretty faces in the photos (yes-yes, it’s you!). If you haven’t, see what you’ve missed and be sure not to miss it next year. So let’s dive into the best Lviv Euro DrupalCamp memories and see how it has been! Hold tight! We are beginning.

There’s nothing better for a drupaler’s inquiring mind and vivid imagination than a quest through the mysterious Lviv. That was the first, very exciting part of Lviv Euro DrupalCamp 2015.

Even the Lviv rain worked in our favour: it added some authenticity to the challenging atmosphere of the Civil war that the participants imagined themselves in. No jokes! But keep calm: none of these rifles really hurt anyone.

Well, yes, our Drupal quest is something not for sissies! ;) However, there were some very special, delicate participants in it. But they fully understood the challenge of the situation.

The quest winners received medals at the cool Drupal party, which is going to be the next point in our story.

The “Glorious” party: drupalers know how to have fun

Let’s move on to the next stage of drupalization, with over 200 liters of beers and endless Drupal fun! Over 150 drupalers gathered for the pre-party to Lviv Euro DrupalCamp 2015 in a famous Lviv pub to meet old friends and make new ones. Happy faces and cheerful voices everywhere. Nice to meet you! Long time, no see! What do you do? Drupalling, of course! ;)

Drupalers rock! In the truest sense of the word. Our special guests, Gloria band, gave a fantastic rock performance, playing lots of famous songs in their own manner. “It’s my life, it’s now or never!” was the one that gathered most Drupal developers on the dance floor. Maybe because it’s about a drupaler’s way of life? ;)

We all like to receive presents. Besides medals for the quest winners, there were nice gifts! A VIP pass to the first row of seats at the next day’s reports, two tickets for Lviv Euro DrupalCamp 2016...as well as a cute Druplicon, a lemon, a card with Lviv, a chocolate bar, and an air balloon. The winners were determined according to the numbers on their registration bracelets. Everything’s fair in the Drupal world!

Well, no matter how tired (but happy) drupalers were after the party, the next day was something they couldn’t miss. The most important part of Lviv Euro DrupalCamp 2015 began!

The Dnister Hotel in Lviv became like a big beehive with lots of drupalers bustling around, taking pictures, eating yummy cookies at coffee breaks, and, of course, choosing the most interesting Drupal reports that came in 3 streams. Everyone could find reports to their own liking. Talented drupalers shared their ideas and answered quetions on latest trends in Drupal development, Web design, QA testing, front-end development and much more.

Special prizes (5 phpstorm licenses) were provided for those who filled out a questionnaire! The youngest drupalers helped select the winners.

A special word of thanks to the sponsors of Lviv Euro DrupalCamp 2015, famous IT giants. The golden sponsors are Adyax and FFW, the bronze sponsors are JetBrains and ADCI solutions.

Just imagine having so many Drupal gurus all gathered in one place! It doesn't matter whether you are a front end or back end developer, web designer, QA engineer or manager - everyone will find...

Hola, drupalistas! :) The long-expected DrupalCon Barcelona 2015 is approaching! It is so close that we can feel its hot heartbeat in the rhythm of flamenco. Time to join this amazing Drupal “...

Hi, drupalers! Enjoying your summer? Time to make plans for your awesome autumn! We have checked the forecasts, analyzed the position of stars, written php scripts to define the luckiest date and...

Mondays… The beginning of working week is always quite hard. Is there any way we can make them not so much annoying? Well, yeah! The answer is SymfonyCafe!