Lutsk DrupalCamp 2017 as one more step to DrupalCon Ukraine

10.10.2017
Comments
Share on FacebookShare on TwitterShare on GooglePlusShare on Linkedin 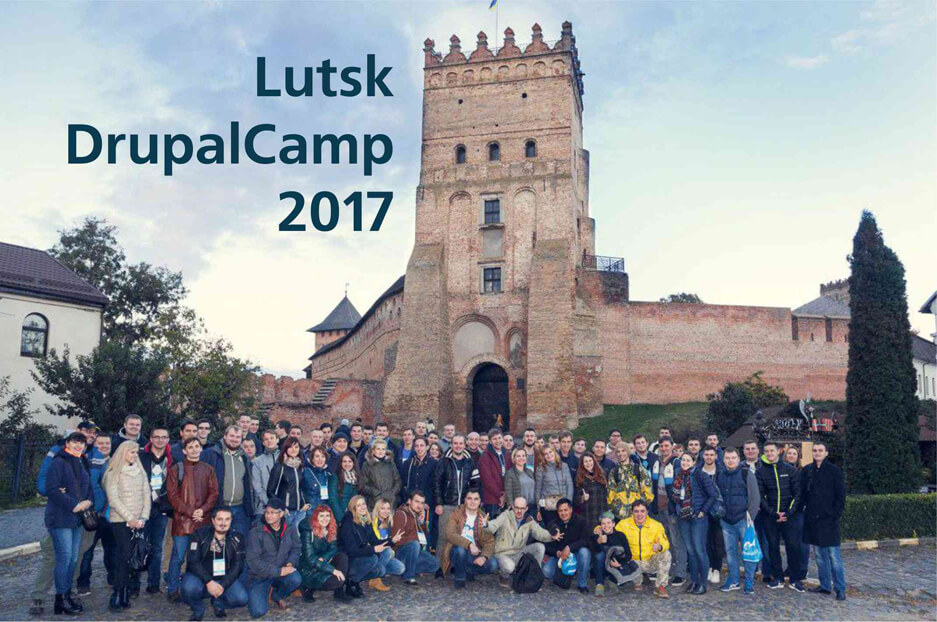 A few months ago we announced Lutsk DrupalCamp 2017 and now we can proudly say we accomplished it! As it was often repeated and written on t-shirt backs, this event is plus one step to DrupalCon Ukraine!

Smiling receptionists met guests, registered them and gave bags with merch. Someone was tasting coffee, someone was drinking tea, someone gave an interview to media, someone exchanged small talks with colleagues. Everyone was seeking familiar faces, giving hugs and handshakes to old friends.

The official part of Drupal camp in Lutsk

As they say, business before pleasure. The Drupal conference was held in the Adrenaline City entertainment centre. Cinema halls are the best fit for this purpose, because the seats are arranged in such a way that listeners on last rows sit high up and everyone can see equally well. Large screens allow convenient displaying slides prepared by speakers.

Drupal reports were presenting in two halls simultaneously, so that visitors had a choice where to go and what topics to listen to. That was the main hall and Adyax hall, named after the golden sponsors.

There was a friendly environment, jokes, much interaction with the audience, lots of raised hands and clapping and many questions and answers in both directions, so that both speakers and listeners satisfied their curiosity, discovered something new and shared their experiences and knowledge.

Every speaker had their own style. Some followed a prepared strict plan, while some provoked discussion. There was a workshop where the whole audience was divided into teams and did some practical tasks to improve its skills of dealing with a technical specification.

Every speaker received a certificate of appreciation for their contribution to the development of the Ukrainian Drupal community, because each speech is another step towards the professional growth of programmers and a step towards a successful future of IT sphere in Ukraine.

On coffee breaks and dinner between the lectures there was much conversation. People shared impressions and met new acquaintances.

Golden sponsor Adyax gave everyone an opportunity to everyone to win one of three portable bluetooth speakers or a small neon light made in a shape of Darth Vader.

Silver sponsor EPAM gave different prizes to those who could set up the puzzle in one minute or less. In addition two lucky people whose names were randomly chosen got power banks.

And, of course, we took general picture to remember this great day. There are so much of us! Almost 300 Drupal fans came to Lutsk DrupalCamp 2017!

Work hard, play hard. There’s a time to be serious and time to be relaxed. The official part was followed by the non-official part, which was held in Lutsk castle of XIV century.

Beer, bread, and meat - a medieval-like meal. Grilled sausages, steaks and baked potato were all cooked directly before the eyes of all who attended after-party.

The atmosphere of the medieval castle was also complemented by the fire tamers who showed their dangerous and spectacular tricks under starry sky. Lutsk theatre “Fire Dance” ended their breathtaking performance with a burning inscription “LUTSK DRUPAL CAMP 2017”.

We thank every visitor, every speaker, every sponsor and every person who contributed and made this great event happen. We’ve shared the brightest of our  impressions of Lutsk DrupalCamp 2017 in this article. Feel free to share yours in social media or e-mail!

See you soon at next Drupal camps next years!

Don’t miss a big conference for all Drupal lovers! October 7, 2017 is one extremely productive and unforgettable day, when 14 speakers and about 300 participants will get together. So be one of...

"Drupal changed my life”. Each of us can say that for sure, so we put this phrase on our T-shirts. It’s no wonder InternetDevels became a silver sponsor and attendee of one of the biggest Drupal...

3
InternetDevels at Branham300 Launch Event: many impressions in one interview
Events
1644 views

What were the nice and unique moments of this meetup? Who brought people to tears with an inspirational speech? Under what circumstances did Viktor Levandovsky fall in love? What is the most...

Many remember our last year’s arrival to DrupalCamp Kyiv 2016. We were dressed in red T-shirt that had hearts and the phrase “I love Drupal.” The flames of our love for Drupal have not been...

Spring is in bloom! It’s time for renovation, improvement and cleaning up everything, including websites. So it’s no wonder that the Drudesk website support service, which specializes in all these...