Features for iPhone/iPad on Your Site

11.01.2013
Comments
Share on FacebookShare on TwitterShare on GooglePlusShare on Linkedin Nowadays iPhone and iPad (further iGadgets) are not something unfamiliar to us. Quite often website developers come across the tasks related to the realization of functional for these devices.

In this article, we will discuss the following: finger scroll and image optimization for Retina displays.

Finger Scroll is an integral part of iGadgets functional, for it makes the device's application more user-friendly. But is the realization itself easy? Library jQuery and caroufredsel and jQuery Touchwipe Plugin render help in fulfilling the task.

For the sake of an example, we will create a logotypes' carousel feature that can be scrolled. Its realization is quite simple, indeed.

The example is taken from this site. Let’s have a closer look at the code.

1. Drupal behaviors (for Drupal 7), if your code is not used in Drupal you can omit it.

2. Bind the value partnerList to the container which is holding our carousel.

3. Add scroll buttons (next/back); not all of us are so far iGadget owners.

4. Link up our block with the carousel .

We won’t dwell on  setup as we have the related documentation accessible on the site. The only point to be highlighted here is the realization of the scroll feature itself, because it is the issue we are addressing here.

Wipe is the parameter itself that enables finger scroll feature on our iGadgets.

Enable jQuery Touchwipe Plugin for realization of this possibility. The functional of our carousel has been completed. Add some CSS to make everything look appropriate.

You can look at the realization, the block with logotypes and clients’ references at homepage of this site. 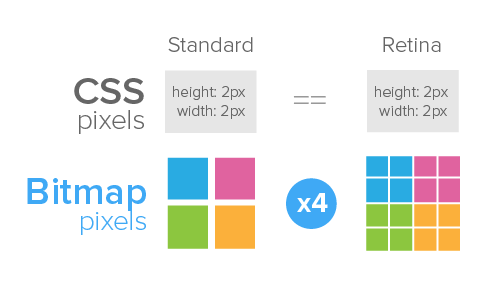 Retina is the name of LCD display, used in Apple gadgets, that stands out among others for it provides higher resolution (326 dpi). As proper scientific researches have proved, human eye is only capable of perceiving 300 PPI. Manufacturers state that pixelization of an image on this type of displays is not perceived by a human eye.

The latest models of our iGadgets have exactly the same display characteristics. On Retina displays the pixel density is four times higher: 200×300 pixel image on Retina display has 400×600 pixels.

Consequently, our task is to allow users to both make the most out of their gadgets and enjoy a higher quality images. As we know, the higher is the resolution, the more file size increase it requires. Hence, we should not forget about the users who still do not possess iGadgets. In their case, there's no point in uploading useless megabytes!

Let’s skip to the task of downloading an image for Retina which is four times bigger. Let us take as an example the background images for pictures.

Below is the realization itself:

Let’s see what's going on. We have set background size and styles in the first block. The next block is determined for Retina. Here we set Retina as a media device and use to coordinate between physical and CSS pixels.

These are the requirements that should be fulfilled when bigger image is being downloaded. The construction @2x in the image name must be written out.

The task to this point has been fulfilled: the users of iGadgets enjoy the image, the rest do not have to do useless megabyte uploads.

There may be instances when a web developer needs to transfer some database changes from one site to another. Moving the...

As social networks gain more and more ground customers are often confronted with the task of integrating their sites with Facebook, Twitter, Google+, etc. ...

It is common knowledge that Google Analytics (hereinafter GA) is a powerful tool for collecting data about user...

Queue API is a particular functional in Drupal that allows you to line up all labor-intensive operations and further check up their implementation on the site. Unlike Batch API,...

This article is about hot quickly to configure the module Search API and Search API Solr search, and how to display the data from Solr server with the help of the module Views.