Agile: let’s learn from the best ones (part 3)

24.03.2017
Comments
Share on FacebookShare on TwitterShare on GooglePlusShare on Linkedin 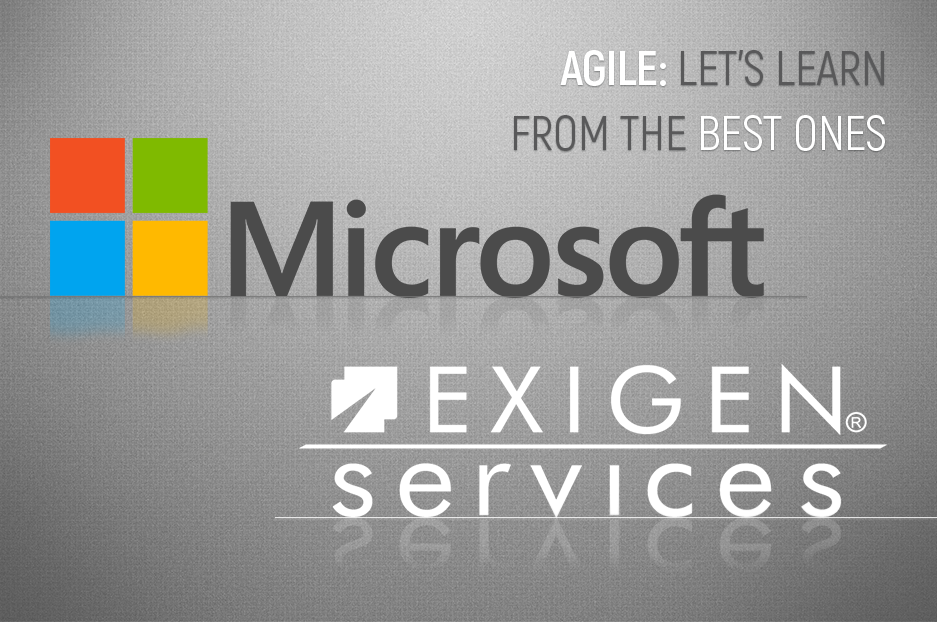 The series of blogs about implementing Agile in large companies continues! After Intel and Nokia, Apple and Philips, the time has come to discuss Microsoft and Exigen Services.

Microsoft has been a famous company for many years, and it does not need any explanation of the reasons for its success. However, after decades of using the waterfall model, the new rules dictated by the World Wide Web could not help but influence it. Namely: a modern approach to software development, which is divided into iterations and lets you respond to changes with more flexibility.

The Visual Studio team was one of the first ones to start using Agile in Microsoft. And while the whole of Microsoft were using the waterfall model, Visual Studio developers decided to switch to Agile. Thanks to such principles as 3-week sprints, frequent updates, frequent releases and, as a result, well-timed fixing of bugs and errors, Visual Studio managed to create software of a higher quality and to release products more often.

Moreover, the new approach to treating the source code and its management was established. It’s a well-known fact that communication and experience exchange is what makes Agile succeed. In the past, each Microsoft team used to jealously guard their own work, and sharing was out of the question. That’s why members of one team had very limited access to the work of others: they couldn’t get a glimpse of the source code written by other web developers.

With the Agile’s introduction, everything changed. Even though the parallel coding was not introduced, creating “forks” for the short-term outlook was already in practice. For example, this is exactly how Microsoft Hyper-V was developed. Another fact: if people in the Bing team want to take a look at the Windows OS’s code, no problem! They can even change it. It can only be done after the approval and with the help of a few people, but still, it’s possible.

The development and testing combination, the so-called combined technique (which was first used by the Bing team), is being introduced in other Microsoft teams. In the Bing team, the task to create program tests was given to developers, and not to testers. It doesn’t mean that QA testers are not needed anymore, but they usually test the end product manually. Bing showed good results in this experiment, by developing high quality software.

As we can see, right after DevDiv (Microsoft’s Developer Division) started using the flexible developing methods, the first results came in. Then, the other teams such as Skype / Lync and Microsoft Studios began adopting their experience. Sometimes they changed those management methods — for example, they used 2 weeks sprints — but the whole idea remained the same. But what best shows the usefulness of Agile are users who are very pleased with the software quality, frequent releases and updates.

Next, let’s talk about a little less famous but nevertheless successful company, Exigen Services. It’s a private multinational company that specialises in the software development on a by-order basis.

This company is also so interesting to us because it makes active use of the flexible Agile methodology. They have been doing it since they started using extreme programming in their project in 2002. And in 2004 they started working on a project together with the Dynix company using the Scrum methodology. According to Jeff Sutherland (one of the inventors of this methodology), at that point in time this project was one of the most productive ones among all of the Java projects of the same level of around 1 million lines of code.

In 2008, Sun Microsystems (the company that was practicing software development at that time; the same year they bought the manufacturer of the database management system MySQL for $1 billion) signed the 3-year outsourcing agreement with Exigen Services. It was by using Agile that allowed Exigen Services to leave 23 rivals behind. The Sun Microsystems corporation chose Exigen Services because of their unique approach to build relations of partnership with clients and because of their experience in working with Agile development methodology — SCRUM and eXtreme Programming (XP).

Next time we will find out not only about a few more companies that use Agile, but in what countries it’s used as well.

Stay with us for the most interesting part!

Creating or developing your web resource is a complex process. Your project life cycle consists of many phases. Let’s start from the very beginning. We have already written that in the initial...

2
Why is estimation of web development projects so challenging?
Project Management
2263 views

Today we are going to name challenges programmers are facing when they have to make an estimate, to clarify what makes this stage of project developing so ambiguous and hard.

Time for some more useful project management information by our expert Ivanna aka Vania ;) Having learnt about retrospective and sprint estimation and seen how Agile technology is used...

We continue learning about the implementation of Agile at big companies from the series of blog posts by our project manager Ivanna, aka Vania. Let’s now give her the floor once again.

5
Agile: let’s learn from the best ones
Project Management
39521 views