Passing the baton of your contrib module

31.01.2018
Comments
Share on FacebookShare on TwitterShare on GooglePlusShare on Linkedin 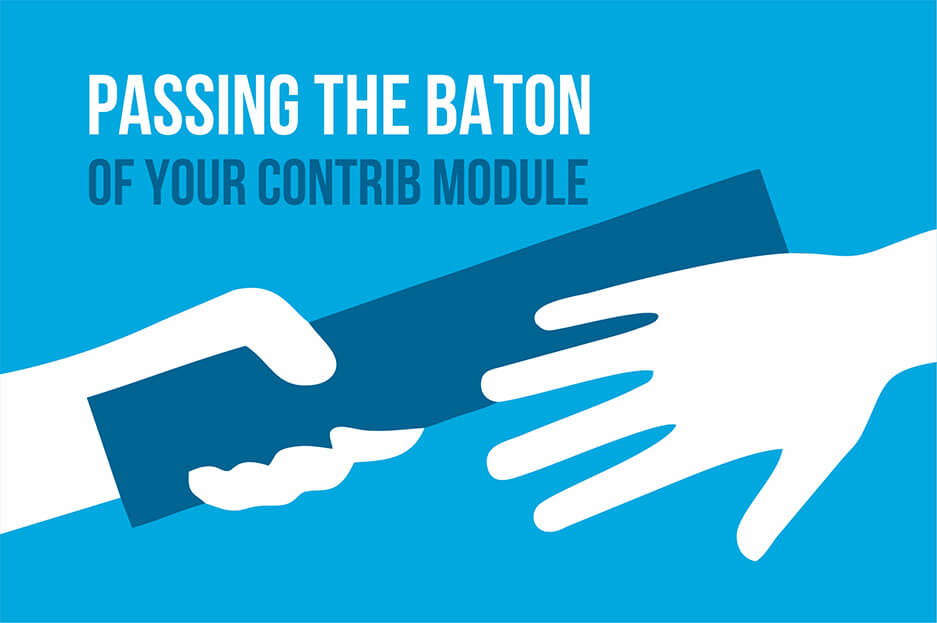 This was a blog post written by guest author Martin Postma (lolandese).
He usually writes directly on Drupal.org as an author of documentation.
Documentation is however not included on Drupal Planet so he asked us
to publish it on our blog to give it more exposure to stimulate the kick-off of this new initiative.

Handing over ownership of a module you authored isn't always easy. You invested probably a substantial amount of time in it. It might feel like giving "your baby" away. Sometimes, however, it is the way to "keep it alive" if for one reason or the other you lack the time to solve major issues or port it to Drupal 8. Even if you intend to stay active as a maintainer, it might be good to get more people involved when the complexity of your project grows. Many hands make light work. Besides, passing the baton makes part of the Open Source spirit that makes the community prosper.

To attract others, changing the maintenance status of a project to "Seeking new maintainer" is the first thing to do. If you want to say, "Hey, you can become a maintainer, but solve some active issues first", then the Open Ownership Pledge might be a good addition. It gives some guarantees to those deciding to write a patch for your module. On the other hand, it assures you that the project will receive a development boost before passing it on. In short, being a win-win for both sides, it provides some basic rules by which to "play the game" to become a co-maintainer or take over ownership.

Recently, the initiative of the Open Ownership Pledge was kicked off by InternetDevels website development company and me (lolandese) with a series of modules on which it was applied. InternetDevels is a Ukrainian based company that worked on both Symfony and Drupal projects long before the release of Drupal 8. Along with excellent Drupal developers, they found themselves with some Symfony developers that were relatively new to Drupal but experienced with Symfony. That gave them a headstart for Drupal 8. The way InternetDevels choose to make those developers "get their hands dirty" with Drupal 8 is by letting them work on contrib modules more than writing custom code.

The first module, UpTime Widget, passed ownership only five days after starting the initiative and resulted in a bunch of issues being fixed and a reinvigorated working Drupal 8 version of the module.

The long-term aim of the Open Ownership Pledge is to have more projects involved that grow and receive continued maintenance by a chain of developers that pass on ownership when needed. That makes part of the spirit of Open Source that makes our community thrive. Please, consider passing the baton of any project you currently maintain on Drupal.org.

1
Drupal or WordPress: what kinds of businesses does each CMS fit best? (infographic)
Drupal Development
4521 views

Taking into account technical capabilities, cost and development time, let’s now try to define what types of websites are a better fit for each CMS. What kinds of businesses and spheres of social...

Printed newspapers and magazines are now being displaced with Internet publications. How can Drupal help media and publishing organizations reach their readership among Internet users? Find out by...

There is no place for rivalry, even for such life-long competition as that between Drupal and WordPress, where the most important result is an absolutely happy customer. For every case, there is a...

Even when salt, shells or stones were used instead of money, the most successful sellers were those relying on marketing and analytics! Today, with modern online stores and platforms such as...

Thanks to this, Drupal will not only let you leave your competitors behind, but also multiply this effect by many times. Let’s see how the multisite feature works, when to choose it, and what...