13.10.2014
Comments
Share on FacebookShare on TwitterShare on GooglePlusShare on Linkedin 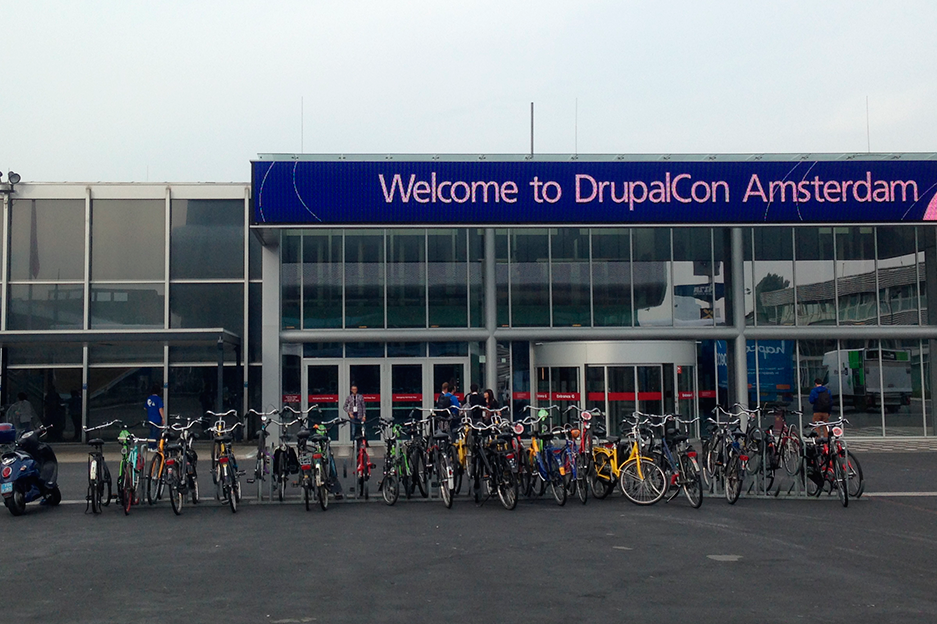 Where on this planet as a pedestrian, you can be hit by bicycle and… be guilty of it? Amsterdam, you are just awesome! :)

DrupalCon is over, and its attendees are in the relaxed process of event reminiscence. True Drupal developers are never tired of sessions, code-sprints, workshops and just fuss between these events; and yes, this year’s Con has provided all of these! But you know what? You can read about this stuff in dozens of other materials. And here we have gathered those moments and snapshots, which made our days at DrupalCon!

Early bird gets the worm, ain't it? Our heroic Drupal Car has been one of the first vehicles to arrive at the event. So we had no problems finding a convenient parking space near RAI conference hall. That was a reward for a car which has completed a 1,500 km mission of delivering our delegation to Con! Have no doubt, very soon local bicycles have crowded this tourist :)

Our team enjoys time at @DrupalConEur. You can recognize us by our bright green T-Shirts :)

And here you can see a very rare moment. Only two people in 4m2 area. Trust us — such picture has been impossible to shoot between sessions!

Ukraine is well presented on #drupalcon Amsterdam - with @InternetDevels

No, we mean it. Level of energy when all the people were coming to the hall to have a rest/to chat/to make connections/to hang out… Business cards, lunch boxes, flyers, badges, huge frying pans, red drupalcon t-shirts, traditional Ukrainian mugs (oh, guess whose souvenirs were those), banners, booths… This twirl has got you, and you just needed to follow it. Thanks to RAI conference center to have enough space to contain all of it!

InternetDevels are having good time at @DrupalConEur. Come over and meet us at the booth #504! #Drupal #drupalcon

Back to Drupal — none of the news could have been more loud and expected as Drupal 8 beta release! By the way, we have heard opposite opinions concerning this launch: both anxiety about new features and pessimism about new version complexity. These factors can both bring new people to the society and make some experienced web developers quit the market… Interesting version, isn’t it? Nevertheless, the long-awaited release has been made and the number of happy faces was really huge (well, a common thing in Amsterdam, you know?).

And here you can see another happy face after receiving gratitude from organizers on silver package sponsorship. Guys, thank you! In our turn, we may promise to continue supporting Drupal community!

We got gratitude letter from @DrupalConEur organizers for silver sponsorship. Are happy about that! #drupalcon

If you have attended other DrupalCons, you know, that the ceremony of announcing the next host-city is one of the most exciting events. It’s almost like an Oscar or Grammy! You know what unites Freddie Mercury, Montserrat Caballe and Leo Messi? Sure, that is Barcelona! Let’s hope, that in a year the whole world will also know this city for Drupal! We will keep an eye on it!

P.S. Amsterdam has lots of mysteries. And now, after a long ~25h trip back to Ukraine, we still have one riddle left. Those huge olive bottles. Why? What for? Has anybody seen them opened? Those who had been at DrupalCon will understand. But we guess we’ll never know :)

We are bronze sponsors of Drupal White Nights! The event is taking palce in St. Petesburg on June, 7. Come and support the Drupal Community!