Drupal 8 release parties by InternetDevels: a tale of 3 cakes and much more!

20.11.2015
Comments
Share on FacebookShare on TwitterShare on GooglePlusShare on Linkedin 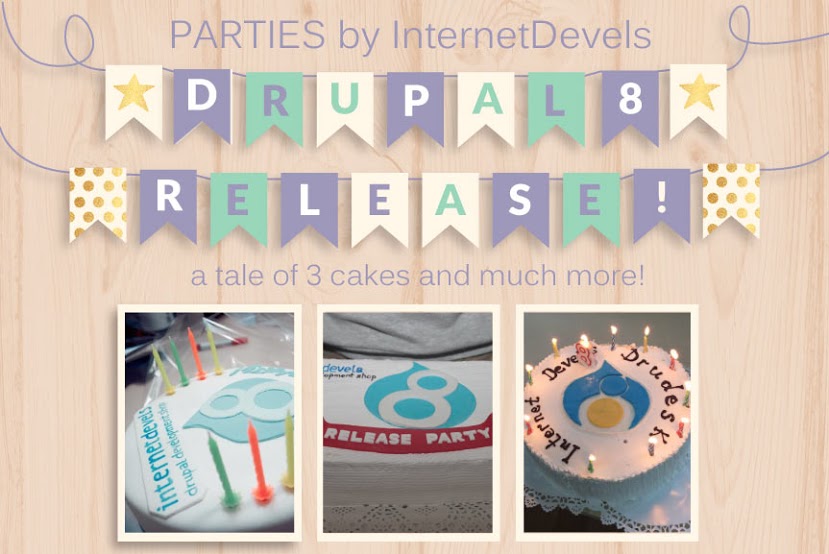 Every drupaler’s heart was beating faster yesterday. Expectation, excitement, and absolute joy! Yes, it finally happened! Drupal 8.0.0 was officially released yesterday! Did we celebrate it? You bet we did! InternetDevels Drupal development company threw not just one, but 3 parties in different Ukrainian cities to honor the latest and coolest version of our favorite site-building platform. So let us tell you a tale of three cities...and of three awesome cakes as well. Here we go! Get ready for the “tasty” story :)

Drupal 8 release party in Lutsk: the sword of honor!

Our story begins in the city of Lutsk because it’s the heart office… well, head office of InternetDevels, at least :) Our colleagues and guests from other cities couldn’t wait to hear the amazing “Drupal 8 module development” report given by our CEO Pavel Makhrinsky and our top Drupal developer Sergiy Scripchuk. That was really something new to learn! After the report, everyone had a friendly chat, as well as some yummy treats.

The awesome Drupal cake was quietly standing on the table, attracting everyone’s attention and making their mouths water. And finally the cake’s time came! A knife is not good enough to cut such a masterpiece. So our CEO used his souvenir sword for that purpose. A thrilling and fascinating scene! Hurray to Drupal 8!

Drupal 8 release party in Rivne: the “warm blanket” of friendliness

The first epithets people give about the Drupal 8 release party in the city of Rivne is “friendly” and “homelike”. You felt like you were wrapped in a warm blanket, wearing cozy slippers. This atmosphere helped everyone get closer to each other...and understand Drupal 8 better.

Two reports were given by top developers of our Rivne office. Yuriy Petryk shared his ideas on “Symfony 2 components in Drupal 8”. Oleg Vegera and Roman Khimin told the audience about “What is new in Drupal 8”. Great stuff to listen to!

All work and no play is not a drupaler’s way :) So we also had chats, treats, beer, and gifts. Who got those cute 3D Druplicons? The winners were determined by the draw. And the Rivne cake was amazing as well!

Our Lviv office experts, as well as guests from other cities and from abroad, had a really awesome time celebrating the Drupal 8 release. It all began with the report of our top developer Ivan Tibezh. “Switching to Drupal 8. Comparing the code” was something worth hearing about. The audience was really active with their questions.

What else is necessary for full drupalization? Just like in the other cities, we had the beautiful and delicious Drupal 8 cake, cute Druplicon gifts, and a lot of fun. But that wasn’t all! A live band played covers of famous songs, and there was a special beerpong game all the guests enjoyed. Did you think it was just a game for boys? Guess again! The beauties from the sales department of our Lviv office were the winners! :)

That’s the end of our party story. But everything is just beginning for Drupal 8! If you want to know more about how to build a site with it, read blog posts by our web developers like this or this and follow our next publications. If you want someone to build an amazing Drupal 8 website for you, upgrade your existing one or add new features, don’t hesitate to hire us. Drupal 8 has come! Let’s celebrate it and enjoy the amazing innovations it has to offer!

1
IT Day Rivne: talking about IT prospects!
Events
272 views

Here's another cool IT event by the organizers of Lviv Euro DrupalCamp. InternetDevels Drupal development company loves making such events. The conference held on the 7th of November in Rivne was...

We’ve been together for years and hope the very best things are yet to come! Yes, we are alike in many ways :) With the big date for all Drupal developers approaching (Drupal 8 release on November...

While Drupal developers polish their coding skills at conferences like Lviv DrupalCamp, online marketing and SEO specialists need their own "hangout" to share some precious knowledge and discuss...

4
Drupal 8 release: great parties are on the way!
Events
4350 views

Great news about the "great 8" brought to you by InternetDevels Drupal team ;) Drupalers, hold your breath and count to 8! Drupal 8 will be finally released on November 19. Lots of Drupal...