Drupal 6: the king is dead, long live the king!

03.12.2015
Comments
Share on FacebookShare on TwitterShare on GooglePlusShare on Linkedin 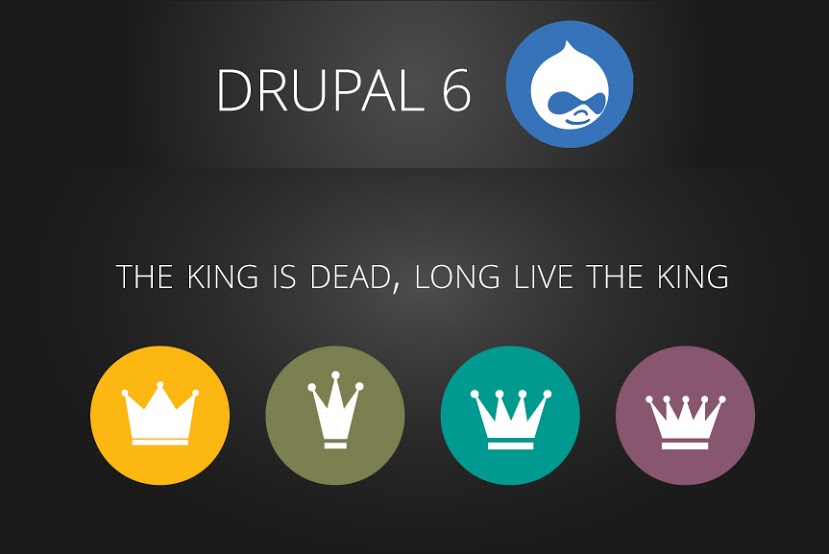 According to “web weather” forecasts, lots of site owners will wish to upgrade their website from Drupal 6 to 8 or 7 in the nearest future :)
Why? Read on to find out more!

In historical movies and books, after a king’s death, the crowd shouts “The king is dead, long live the king!” There is barely a pause between the two phrases, insuring no time for sadness, just joy and celebration!

That’s our story at the moment. While the whole world celebrated the release of Drupal 8 (the latest version of the famous site-building platform), amidst the overwhelming cheers it was hard to notice some sad news. However, there was indeed some sad news, and it is worth the attention of Drupal 6 website owners. But, of course, there is a positive solution!

The Drupal community officially supports only two major Drupal versions: the current one and the previous one. With the release of Drupal 8, there’s no place for Drupal 6 anymore. The focus now is going to be on Drupal 8 and Drupal 7, while Drupal 6 will officially become unsupported.

What does it mean? The community will no longer create new projects, fix bugs in existing ones, develop security or other updates or provide patches. No more core commits will be made to the official tree. The Drupal security team will not provide support or security advisories (see the official Drupal community’s website to find out more details). A website that stays on an unsupported Drupal version may be “vulnerable to as-yet-undiscovered or yet-to-be-invented security vulnerabilities.”

However, this time it won’t happen abruptly. The community decided to give Drupal 6 website owners more time to make the necessary changes. They will have a support period that extends three months after Drupal 8 release. The final date when Drupal 6 reaches the end of its life and will no longer be supported is February 24th 2016.

The positive part: keep calm and upgrade your website ;)

Here’s the solution! To benefit from the community’s ongoing active support, as well as enjoy the latest enhancements, Drupal 6 website owners are encouraged to upgrade to a newer version. You can upgrade from Drupal 6 to the innovational Drupal 8 that’s just been released, or to the proven Drupal 7 that will have the community support for years ahead (until the release of Drupal 9, at least). Your choice may depend on many factors like the complexity of your website, the amount of custom modules, the scope of changes you wish to make, and much more.

Let our experienced Drupal developers carefully study your Drupal 6 website and recommend whether you should upgrade to Drupal 8 or 7. We can make the upgrade smooth and painless! Yes, unfortunately, Drupal 6 is dead, no matter how cruel it may sound. But it is giving way to something new, fantastic and cutting-edge. Long live the new king! Contact us and let us begin a new life for your website! ;)

Today marketing campaigns can be easily extended by using an email sending services. These programs are designed to help you reach the right person at the right time with the right message. In...

Hey there! If you are interested in Drupal web development, tips by our dev could do you a world of good. Welcome to learn new things about Drupal 7 and Apache Solr: the benefits of ApacheSolr...

Making your website awesome to look at and easy to use. That’s what responsive Drupal theming exists for. With responsive web design, your website will neatly adapt to any device screen, providing...

Dear readers, once we told you about building social...

A well known saying ‘Better safe than sorry’ claims that any decision making requires careful and thorough consideration before the final choice is actually made. The same is true when it comes to...