Useful links for getting started and working with Docker

11.10.2016
Comments
Share on FacebookShare on TwitterShare on GooglePlusShare on Linkedin 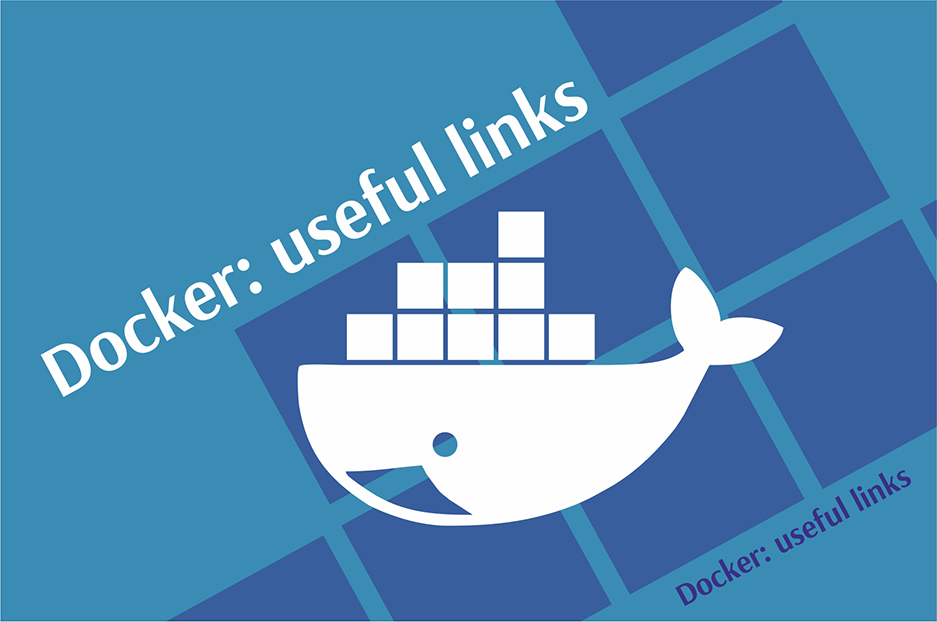 If you are interested in Docker, you have come to the right place. This blog post is meant to help you understand and successfully work with the famous software containerization platform.

We have asked our web developers who are also the author of cache segments and cache in Drupal 7, to share some useful links about Docker. Here we go!

Some useful links about using Docker

Getting started with Docker (a base for a quick start is described here). Docker installation and configuration. Running your first container. Log tracking. Building a server with Dockerfile.

Getting Started with Docker for Mac. A step-by-step guide to quickly install and start running Docker on Mac.

Docker and working with it. The basics of Docker, containers, hypervisors, CoreOS. The key things that are required for work and facilitate Docker use.

Docker toolbox. An installer to quickly and easily install and configure Docker environment on your PC (Windows, Mac).

How To Install and Use Docker on Ubuntu 16.04. Ubuntu upgrade to 16.04 version being very popular, I think it will be interesting to read about the ins and outs of installing and using Docker on this OS. Generally, the article consists of a step-by-step guide:

It’s a good article which covers a lot of material.

Of course, it will be useful to read about the best practices of using Docker. So this bunch of links is dedicated to these practices:

The blog of the author Jpetazzo. A blog post about Docker.

Awesome Linux Containers. Lots of information and resources on containers.

Datadoghq. A bunch of interesting articles about Docker.

Docker ecosystem. A handy schematic demonstration of working with Docker. It will be interesting for general understanding of how the system works.

A cheat note on working with Docker (examples).

And, of course, a big official resource where you can see documentation and much more.

The official video channel by the creators of Docker. It helps you always be up-to-date on the tool and never miss new developments, as well as ways and techniques of using the tool.

A series of videos telling in details what Docker is, where and how it can be applied. Different approaches and methods of use, best practices and many other interesting details are covered in these videos.

This is the Container Camp channel. Here you can find videos from the international series of conferences about containers. For more information, visit container.camp or follow on Twitter @containercamp.

Containers and their importance

A discussion with representatives CoreOS, VMware and Google.

DOCKER FUNDAMENTALS. This course provides practical instructions for getting started with Docker. It includes information on how to create Dockerfiles, build, manage, and share Docker images, container settings. There is also an example of continuous integration.

A bunch of videos that describe the following:

A collection of Dockerfiles: author: Crosbymichael

Dockerfile: an example by Komljen

Dockerfile: an example by Kstaken

Dockerfile: a repository of Dockerfiles by Jfrazelle

Kubernetes: the system for managing Docker containers by Google

Rocker: the tool for creating Dockerfiles

Docker-gen: the tool for generating files on the basis of meta data of the Docker container

Dockerize: the utility that simplifies the running of container applications

Dockerfile_lint: the tool for code quality control for Dockerfiles

Crane: the utility that facilitates the management of images and containers

Lorry: the utility for creating and checking the docker-compose.yml file

Dray: the engine for managing the running of container apps

Forward2docker: the utility to auto forward a port from localhost into ports on Docker containers

Vagrant: the provider for Docker

Ansible: the tool to manage your Docker containers

FuGu: the simple wrapper for Docker

RightScale: ten things to do before deploying Docker

Mervine.net: tips for working with Docker

Raychaser: how to collect Docker logs

CenturyLink Labs: news and tips about Docker and more

Solomon Hykes: the founder of Docker

Jerome Petazzoni: the creator of Docker

Michael Crosby: the creator of Docker

Get started with Docker and have awesome experience!

It’s interesting and challenging to master more technologies. InternetDevels Drupal development company starts also working with .NET and would like to offer you some posts about it. And the...

There is an opinion that a comment section is not needed anymore as it doesn’t do any good to the users, to the author of the content, to the site as a whole and even to the commentators...

If you want to have your own website, you’ve probably thought about which company to choose. So, let’s consider what particular traits a great web development company should possess.

4
Mykhaylo Kudelia: everyone can succeed, you just need to go and do it!
Other
3039 views

Talking to the silver winner of Infomatrix international contest Misha Kudelia was a great pleasure for us. We talked about the contest, about Misha's application for...

Everyone knows the saying “a little bird told me”, and the world’s most reliable little blue bird delivers about 500 million messages a day! Never underestimate the power of Twitter and...